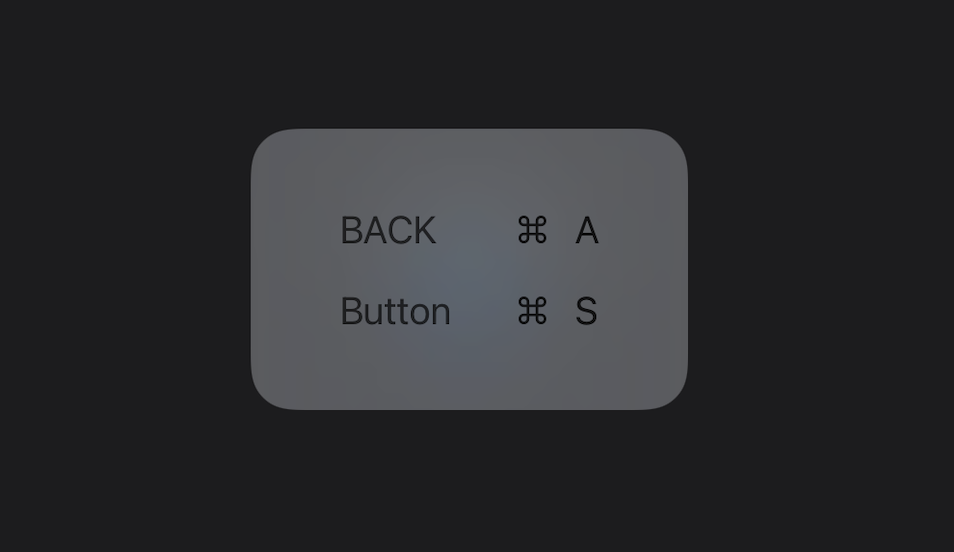 iOS 14 introduced keyboardShortcut, a convenient native way to add keyboard shortcuts to SwiftUI. However, if you end up using it, it likely won’t work. I was curious why that is, so follow along with me for a round of SwiftUI debugging! Spoiler: The workaround is at the end of this article.

Let’s first check out how this feature works:

Simple enough. However, when I tried, it didn’t work in production. After simplifying my setup and eventually writing my own example project, I eventually realized my code is correct and this just doesn’t work.

But surely Apple tested this? Let’s try a few combinations:

Right. So things work pretty much everywhere, but not in the use case that will likely be the most common one: when mixing SwiftUI and UIKit.

I’ve been discussing this on Twitter and was quickly given a workaround (thanks Mateus!) to try:

And sure enough — this indeed does the trick! But it got me even more curious. Mateus talks about a keyboardShortcutBridge in UIHostingController that takes care of keyboard management. Let’s see if we can verify that in LLDB:

Good old _ivarDescription is still useful and shows Swift ivars as well; it can’t show the real type, but it’s good enough to confirm that there’s indeed a keyboardShortcutBridge.

Now let’s look at what sets keyboardShortcutBridge. It seems there’s a code path where this object isn’t set, so let’s find out if that’s the case. When we load SwiftUI’s binary in Hopper and search for this name, we find quite a few matches: 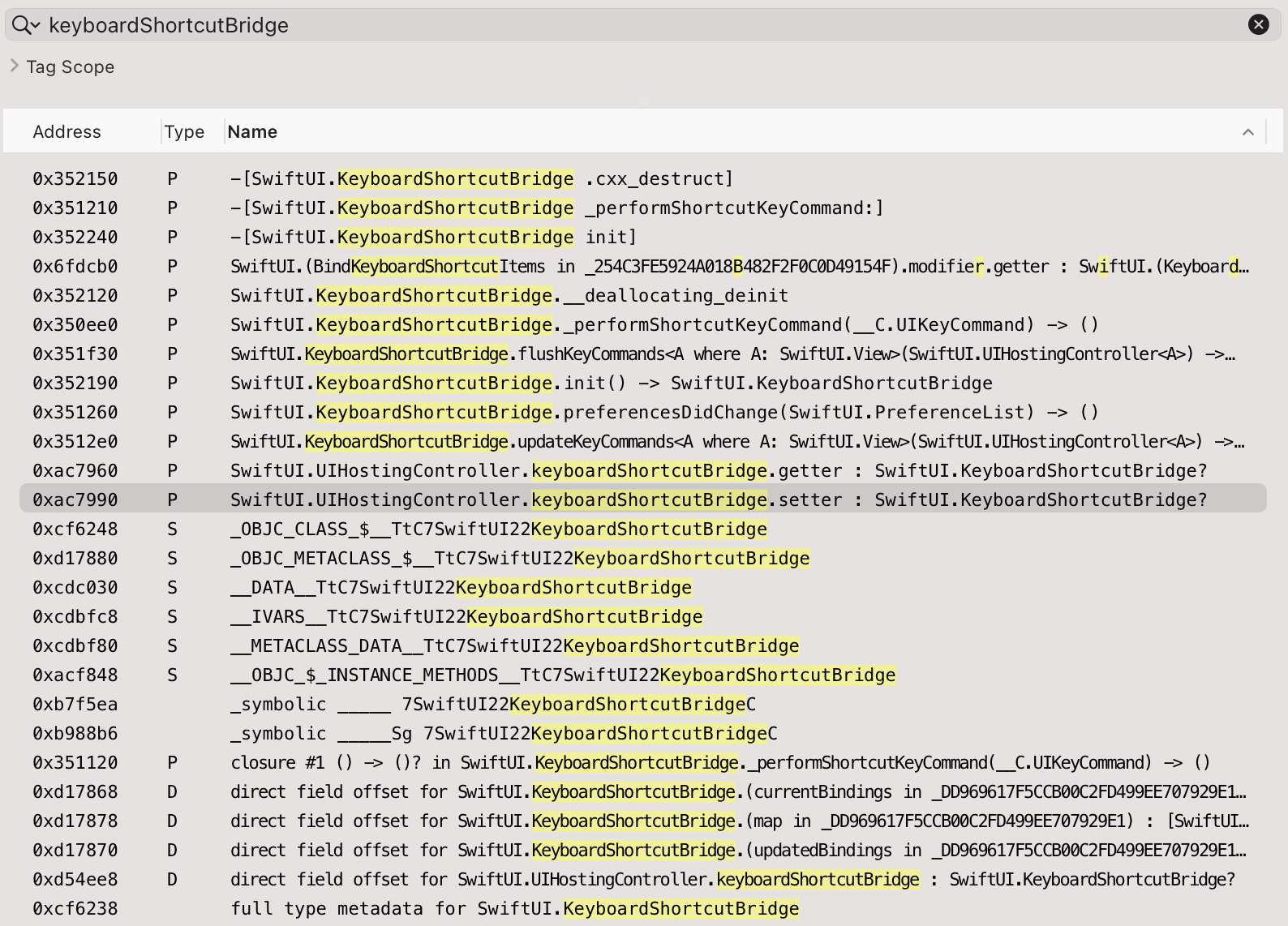 Using Xcode’s breakpoint list isn’t working too well for SwiftUI. Adding the setter there isn’t working (fully qualified). Instead, let’s try using LLDB directly and fuzzy-searching for the breakpoint. You’ll want to stop your program early (before UIHostingController is created) and add the breakpoint manually:

That’s good enough. And sure enough — in the non-working case, the setter is never hit. Once we apply the workaround, the method is hit: 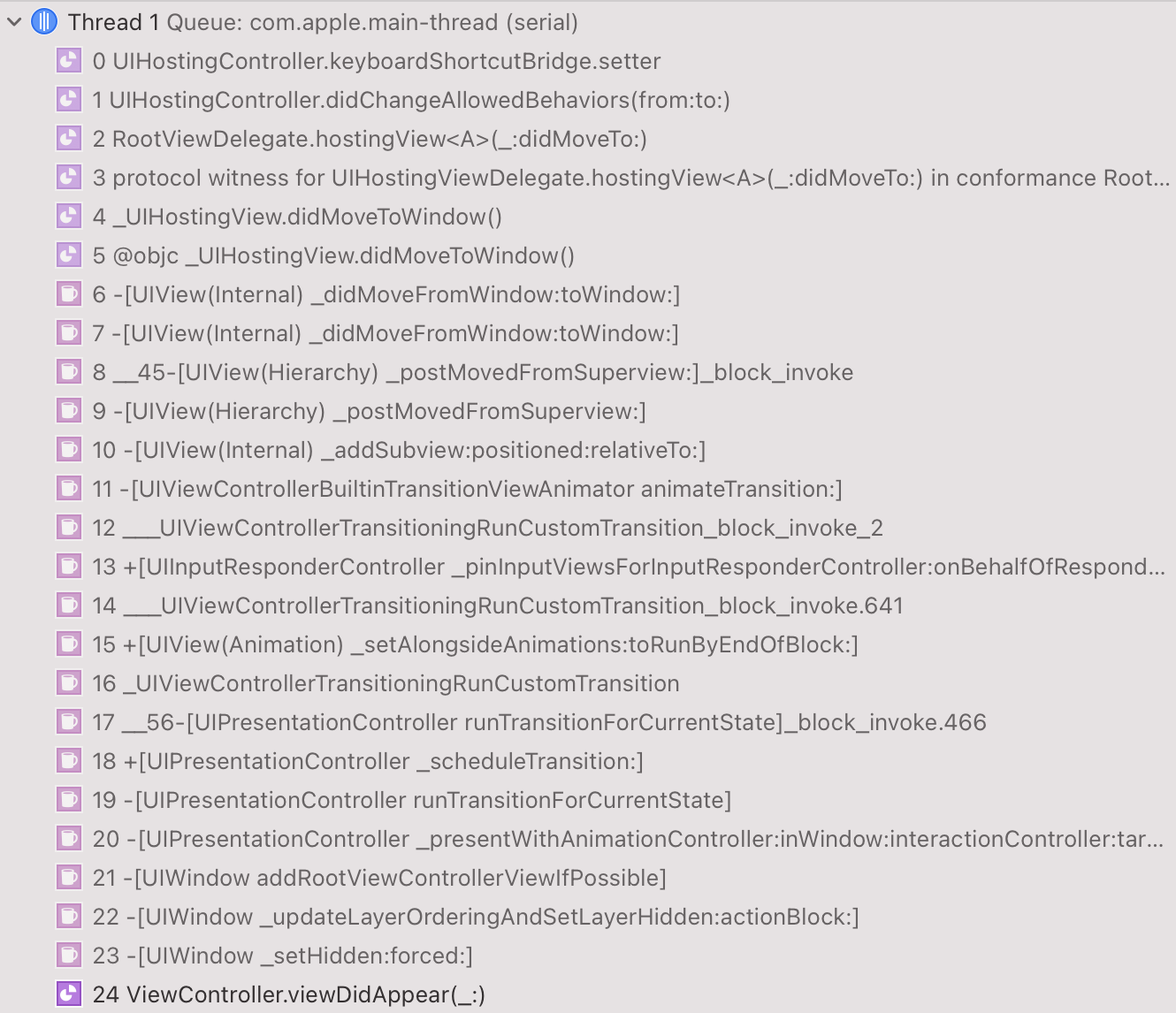 We see that the code responsible for calling the setter is in didChangeAllowedBehaviors.

Next, let’s see if there are any other places that would call this setter. I like to use a full pseudo-code export of SwiftUI. You can create this via Hopper > File > Produce Pseudo-Code File For All Procedures…. This will take many hours and produce a file named SwiftUI.m that’s more than 100 MB in size. Once this is done, use a text editor that can open large files,2 and search for SwiftUI.UIHostingController.keyboardShortcutBridge.setter. The only two code paths are these:

This is mangled Swift, but it’s not hard to see what the unmangled function name is called — it’s our didChangeAllowedBehaviors(from:to") with a lambda inside it, and not anywhere else.

What triggers an allowed behavior change? We can search for SwiftUI.UIHostingController.allowedBehaviors.setter, since didChangeAllowedBehaviors is triggered when the setter is invoked:

So there are two mechanisms that trigger this:

This lines up with our previous tests. SwiftUI app lifecycle works, and if we add UIHostingController as a root view controller, the RootViewDelegate also triggers the change. We can check via a fuzzy breakpoint if a RootViewDelegate is created in the non-working variant via breakpoint set --func-regex RootViewDelegate, and sure enough, there are 13 matches, but not one fires.

When searching for RootViewDelegate( in the full-text SwiftUI.m file, there’s only one match, in s7SwiftUI14_UIHostingViewC15didMoveToWindowyyF. This further confirms our theory. It seems Apple simply forgot a code path to create the keyboard shortcut bridge for the most likely use case of using SwiftUI in existing UIKit apps, which is where it makes most sense.

We can make the workaround slightly better and pack it into an extension. If we avoid making the temporary window key, we can skip a whole class of issues that appear when the key window is unexpectedly changed:

Because the window itself is shown and deallocated within the same run loop, it’ll never be visible. This workaround is safe and only uses public APIs. I reported this issue to Apple via FB8984997. You can read the full bug report and sample project here.

After fixing the iOS 14 version of keyboard shortcut, I realized that the principle is quite simple, and it can be rewritten in around 100 lines of Swift so that this feature is available on iOS 13 as well. The syntax is practically the same:

You can read the full gist here.

I hope this post helps folks when they google “keyboardShortcut SwiftUI not working,” provides a safe workaround, and inspires a few people to dig deeper. Swift is harder to reverse engineer than Objective-C is, but it’s still possible. This was the first time I had to set breakpoints for binary Swift symbols, so it’s good to see that this still works when using LLDB manually.

Supporting Both Tap and Long Press on a Button in SwiftUI

Supporting Both Tap and Long Press on a Button in SwiftUI

My task today was quite simple: adding an optional long-press handler to a button in SwiftUI. A regular tap opens our website and a long press does… something else. Not so difficult, right? Naive ...

Pretty much all Mac apps have a semi-hidden Debug menu that can be triggered via a user defaults entry or via settings. Naturally I wanted to add the same in my latest project. I’m building a new...