While working on our PDF Viewer update for Big Sur and switching to the new Catalyst Mac Interface Idiom, I was greeted with a new exception coming directly from UIKit:

Let’s take a step back — what’s the Catalyst Mac Idiom? With macOS 11 Big Sur, Catalyst learned a new presentation mode. Next to the classic mode where Catalyst apps are scaled to 77 percent and retain their iPad look, there’s a new Optimize Interface for Mac mode that doesn’t use scaling and replaces various UIKit controls with AppKit counterparts.

The new mode is available with Big Sur, and apps can be built so that they use scaling on Catalina and the new Mac mode on Big Sur. We’ll be releasing a new version of PDF Viewer for Mac using the new optimized mode as soon as Apple finalizes Big Sur.

If we write code that works on both Catalina and Big Sur, a category like this will be useful:

This can later be used, for example, in SwiftUI (SwiftUI’s Stepper maps to UIStepper, which is disallowed):

If we look into the runtime, the class does pretty much what we’d expect (I omitted some less useful methods for the sake of brevity):

Back to our crash — things make a bit more sense now. There’s no great equivalent for UIStepper in AppKit, so the folks at Apple decided it’s better to throw an exception if this control is used (FB8727188).

The problem: It isn’t documented which controls are disallowed, and what’s even more problematic is some controls are allowed, but customizations are disallowed. What does UISlider map toward? We can get the pointer from the visual debugger and then use our knowledge of the class structure to call directly into the AppKit view:

NSSlider is the obvious choice, however, the Mac version lacks the appearance customization options UIKit has. Calling any of these customization methods will simply throw (crash) at runtime:

This is problematic, as it’s yet another restriction that isn’t documented. A better choice would’ve been to keep the UIKit variant in case customization exceeds what AppKit can do. It’s a surprising late change, and folks working on Catalyst apps are frustrated:

I have had to remove UISlider, UIStepper & UIRrefreshControl. Might as well start re-writing my entire app in AppKit while I’m at it.

Since there’s no documentation and there are no release notes about any of these behaviors, that just leaves Hopper and decompiling UIKitCore.

We find references to following controls:

This includes any subclasses like AVScrubber (part of AVPlayerView), so this can become a real problem. 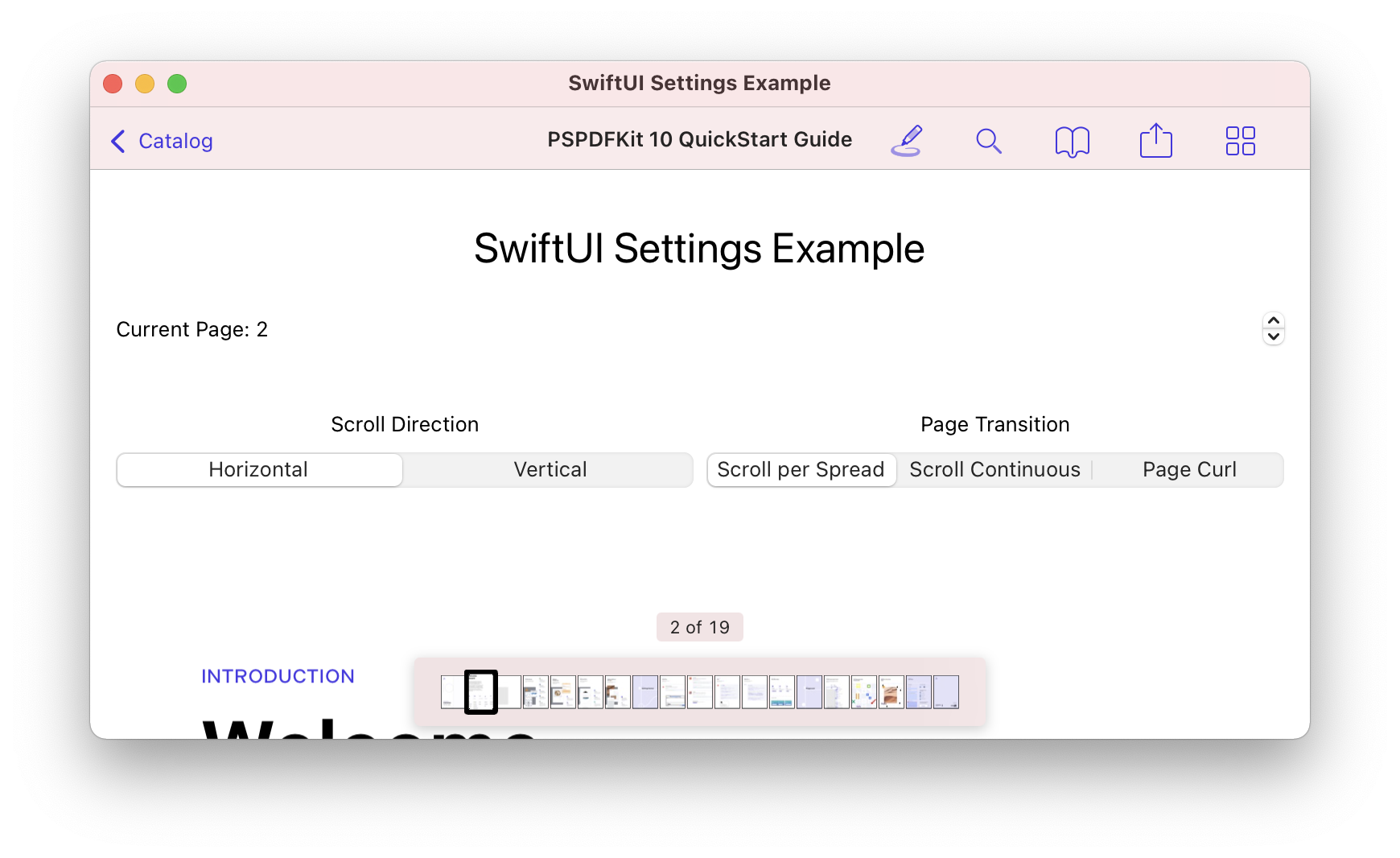 There’s a stepper (next to the “Current Page: 2” label), however, clicking it doesn’t work. This is obviously not something we should ever use for shipping, but it’s fun to play with the internals!

However most of the throw calls seem to be missing. I’ve been looking at the iOS version this whole time, when clearly this is conditional code and we need to look at the macOS version instead.

However, when we open the framework on macOS, there’s no binary. WTH? I remembered reading that Big Sur ships with a built-in dynamic linker cache of all system-provided libraries. Luckily, Hopper has already been updated to be informed of that shared cache, so we can load it via /System/Library/dyld/ and then select UIKitCore as the target.

Wait until everything is loaded and then select File > Produce Pseudo-Code File for All Procedures. This might take a few hours. Once the file is generated, pick a fast text editor (my weapon of choice for something like this is Sublime Text) and load the file. There, search for _throwForUnsupportedNonMacIdiomBehaviorWithReason: again.

The problem: The file is heavily obfuscated; Hopper can’t read the selector names. We can search for the string “Unsupported iOS or Mac Catalyst iPad Idiom” to find the selector matching _throwForUnsupportedNonMacIdiomBehaviorWithReason:. In my case, that’s sub_7fff465801e5.

However, that’s the end of the story for now. The data is there, but the tools can’t yet (!) get a useful format out. We know there are at least five controls that throw an exception on some usage at runtime, however, which one it is exactly is currently hard to know. Shipping a Catalyst app in the new Mac idiom is definitely an adventure.

Jeff Johnson points out that one can abuse LLDB to decompile methods individually. That approach would take far too long to find all the calls that throw here, but it’s a start.

The dyld-shared-cache-big-sur project uses modifications to Apple’s dyld project to fix Objective-C information when extracting the dyld_shared_cache from macOS Big Sur to help Hopper generate readable pseudocode. (Thanks @lclhrst for the hint!)

Using this project, we can extract the dyld cache into a folder:

And then we can decompile UIKitCore with selector names. This doesn’t resolve the individual selector calls, but it’s a step forward.

This answers which controls are affected. Curiously this currently is the only place, and there’s no mention in the headers or compile-time support to warn when these methods are used - but it’s better than no docs. 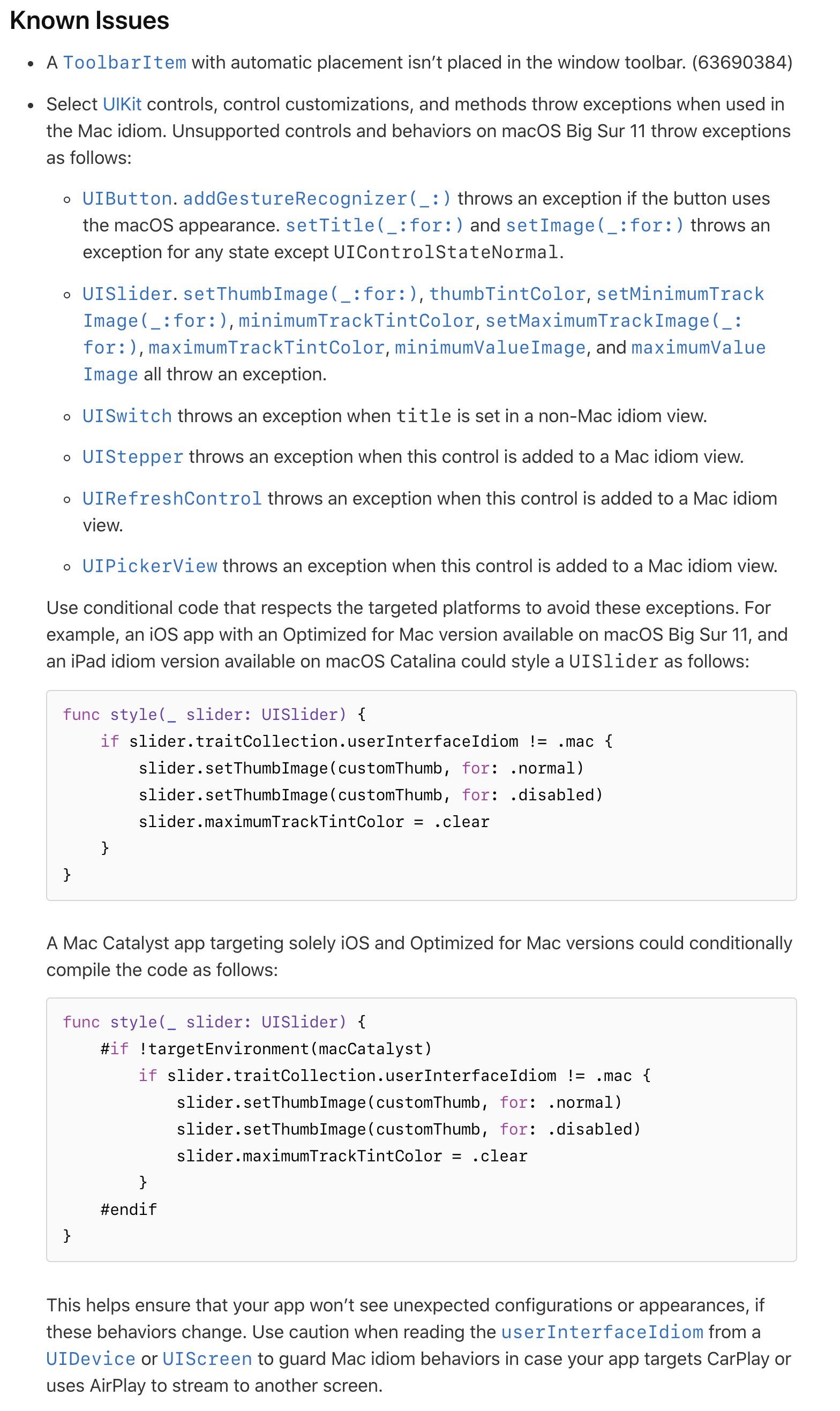 The excitement around Apple’s new M1 chip is everywhere. I bought a MacBook Air 16 GB M1 to see how viable it is as a main development machine — here’s an early report after a week of testing. Xco...