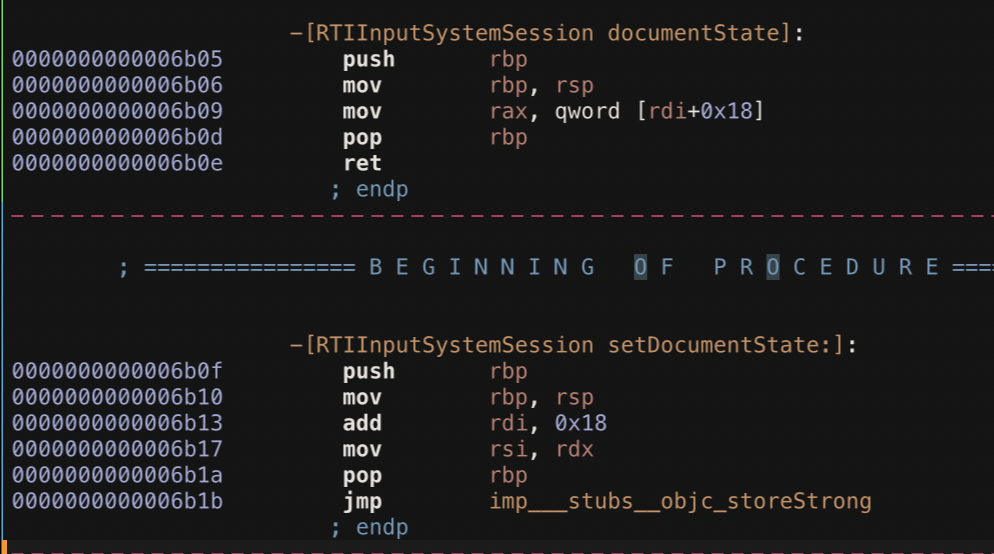 As of macOS 10.15.4, text input in Mac Catalyst apps sometimes crashes. I’ve noticed this a lot in Twitter for Mac, however, we also saw crash reports for PDF Viewer for Mac. My hope was Apple would fix this in 10.15.5, but now the release is out and things are still crashing, so let’s fix this ourselves.

The crashers all circle around NSTextCheckingController, NSBridgedTextCorrectionController, and NSTextInputContext, but they vary quite a bit.

A crash pattern like the one above indicates we’re dealing with an over-release. In times of ARC, this is rare, but it can still happen if a property is set on multiple threads. Text input in Mac Catalyst is a challenge. There’s text and grammar correction that simply works differently than in iOS, and a user expects that this works just like with any other AppKit app. Apple bridged these systems:

Taking a closer look at RemoteTextInput.framework, we can see it uses XPC under the hood. XPC uses background threads to communicate:

In the first crash, we see -[NSTextInputContext(NSTextInputContext_RemoteTextInput_UIKitOnMac) selectedRange_RTI] calling -[RTIDocumentState selectedTextRange]. Let’s find the former. From my earlier experiments with Marzipan, I know that a lot of UIKit-AppKit glue code is in UIKitMacHelper, in the iOSSupport system /System/iOSSupport/System/Library/PrivateFrameworks/UIKitMacHelper.framework, which is really a symlink to /System/Library/PrivateFrameworks/UIKitMacHelper.framework.Versions/A/UIKitMacHelper. However, there’s no selectedRange_RTI implementation. Where else could it be?

To find out where a method or category is implemented, I’m using dladdr, an old trick I learned in 2014. Since this is a bit difficult to call via LLDB, we write a small helper, which can be anywhere in your app:

Once the app runs, we call findHaxx: e -l objc -O -- [NSObject findHaxx] and see that it returns /System/Library/Frameworks/AppKit.framework/Versions/C/AppKit.

Update: @JorgeWritesCode pointed out that there’s a more convenient way to do this directly from LLDB:

Now we know that Apple bolted a lot of Catalyst code directly into AppKit. This is an interesting choice, as every Mac app pays some overhead for Catalyst in Catalina. Let’s look at the pseudocode of selectedRange_RTI with Hopper:

With this pseudocode, we know that NSTextInputContext calls the RemoteTextInput framework through an auxiliary variable. Let’s test this at runtime:

The decompiled code calls rdi = *([self auxiliary] + 0x58); so we know it’s a direct ivar access; we can also access this code at runtime via KVC:

The Catalyst glue calls documentState on RTIInputSystemServiceSession. Let’s look at it via Hopper: 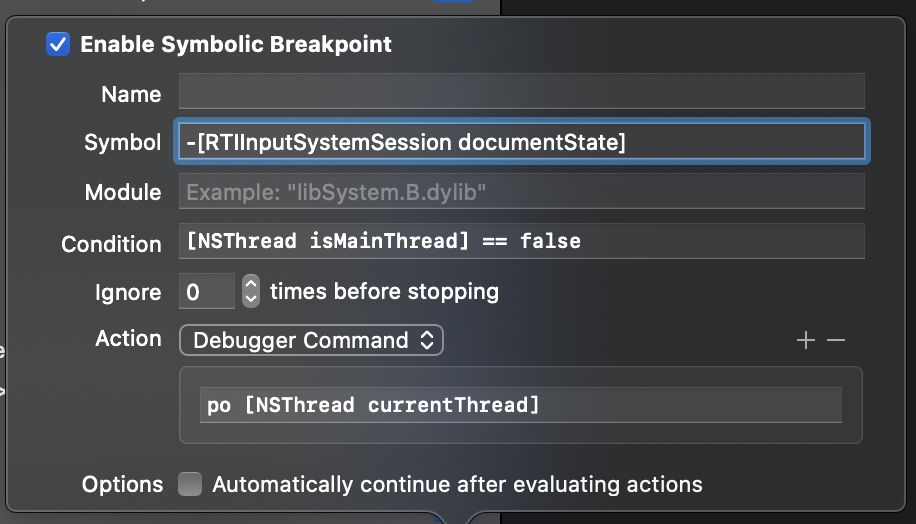 I’m using a conditional breakpoint that stops if non-main-thread access is detected. It also prints out the thread automatically. Since we’re in AppKit, methods are usually called on the main thread (remove the condition to verify). However, sometimes this is called from an XPC thread: 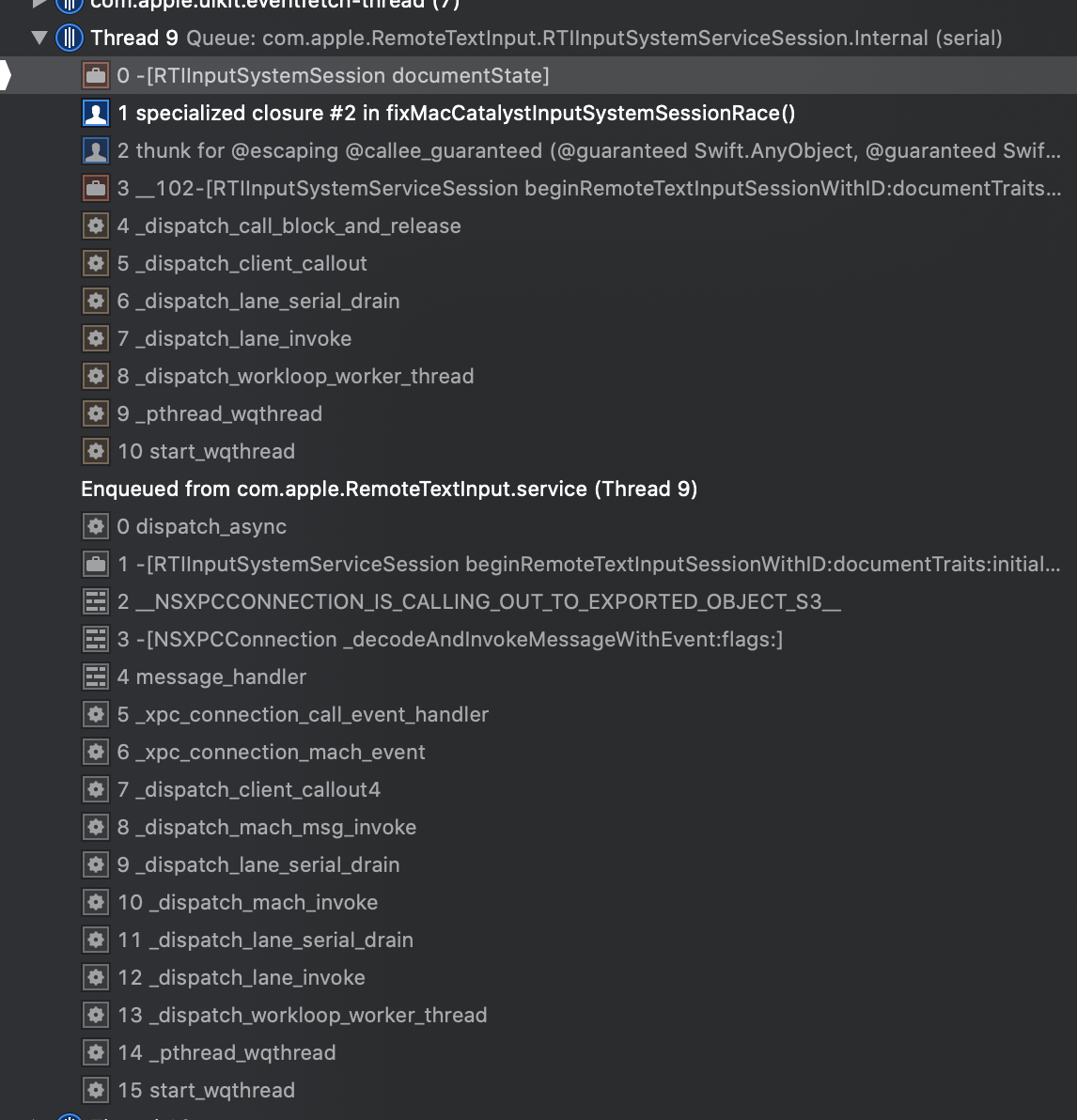 And we verified the issue! documentState is usually accessed from the main thread, but both the getter and setter are also accessed via XPC, and here Apple forgot to dispatch to the main thread.

Here’s an example for the setter:

Now that we understand the issue, it’s fairly easy to fix.1 Let’s add a lock to prevent the property from a raced access:

I’m using os_unfair_lock to synchronize the original property call. Since the actual implementation is extremely short and thus fast, this is a better choice than a more heavyweight dispatch queue to sync.

Now there’s one last problem: When we call this in our app delegate, the RTIInputSystemSession class doesn’t exist. The RemoteTextInput is loaded at some later time, when we’re first entering the call. Of course, we could find a later spot and make sure we call this before any text input, but that’s not an elegant solution. Instead, we can hook into dyld to simply be notified whenever a new framework is loaded into our process:

I’m dispatching to the main thread just to make sure this isn’t accidentally called on multiple threads, in order to not produce yet another race.

The complete code is in this Gist. MIT Licensed. Call installMacCatalystAppKitTextCrashFix() from your App Delegate, and don’t forget to check if Apple might have eventually fixed2 this issue. (Apple folks: FB7593149.)

Since the swizzling code here isn’t easy to write or read, I built InterposeKit, a library that helps with that. Much nicer, eh?